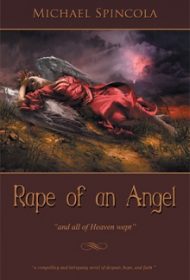 Michael Spincola’s Rape of an Angel is a work of urban Christian fiction that veers sharply and sporadically into the genre of horror.

Kitty Maguire, an angel in the form of a six-year-old girl, is divinely delivered into the care of a Parisian nun and is later raised by loving adoptive parents, ultimately becoming a Sister herself. As an adult, Kitty helps found a Mission in war-torn Rwanda, only to suffer heartbreak when she’s forced to kill rogue soldiers in a vain attempt to interrupt the rape and murder of the other Sisters. Years later, meditating on the loss of her friends, as well as her mother (who died in 9/11), Kitty comes to New York to allow herself to experience delayed grief, only to be randomly victimized by unhinged sexual sadists in the ultimate trial of her faith.

Spincola writes authoritatively about Catholic ministry, Rwandan unrest, and the shocking realities of child abuse and sexual assault. His intimate familiarity with these subjects is sometimes informative but, in the latter cases, highly gratuitous. Spincola lingers on grotesque acts of rape and sexual violence in a way that fetishizes them. Several pages are devoted to an exhaustive, detailed depiction of the attack in Rwanda, and an extensive chapter is devoted to Kitty being repeatedly (and near-fatally) raped and tortured while videotaped. The rape includes electrocution, anal and vaginal penetration by two men at the same time, oral sex that nearly suffocates the Sister and rats inserted into her rectum.

The apparent point of Kitty’s ordeal is for her to offer divine forgiveness to the man who videotapes her assault. But the supernatural forgiveness that comes so easily to Kitty is unlikely to resonate with readers, and the inclusion of this religious theme feels more like an afterthought than an organic revelation.

Overall, Kitty’s story fails to justify its extreme depictions of sexual violence. After reading this novel, it’s likely that even readers with the strongest of stomachs will feel needlessly traumatized.