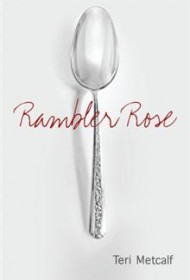 Teri Metcalf’s memoir is an account of her California childhood and coming of age in the 1950s and 1960s.

When Teri is eight, her parents announce that they are divorcing.  Soon after the split, her mother marries Arthur, a truck driver with a volatile temper. Teri loses touch with her father for years; the “Rambler Rose”-patterned silverware her parents acquired when they first married remains one of her few connections to him.  Teri’s relationship with her stepfather is rocky and punctuated by abuse, but never overwhelms her story.  Instead, it serves as a backdrop to her growing rebellious streak, which she eventually channels into success at a Catholic girls’ high school.

Metcalf tells her story through layer upon layer of memories and anecdotes — her own and her family’s.  The author’s writing style is plain and straightforward. A memory of Teri cutting her hands with scissors when her parents’ relationship grew especially tense receives the same emphasis as a memory of cutting paper chains in kindergarten class. Her relationship with Arthur resolves itself slowly and without much fuss, as he eventually learns to respect her.

This understated technique gives the book an almost experimental feel that will likely frustrate readers looking for a more focused narrative, or a clear-cut tale of overcoming adversity.  But for those willing to go with the flow, it quickly becomes hypnotic and engrossing, truly immersing the reader in Metcalf’s past. Rambler Rose loses some of this special quality in its last third, after Teri leaves high school, when her romantic relationships begin to overwhelm the narrative. Overall, however, Rambler Rose is an unusual and rewarding book for readers interested in the possibilities the literary memoir offers.