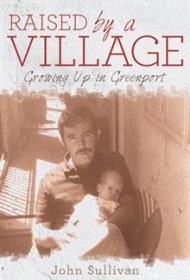 John Sullivan’s first two books—Of Spies and Lies: A CIA Lie Detector Remembers Vietnam and Gatekeeper: Memoirs of a CIA Polygraph Examiner—were based on his 31-year career with the Central Intelligence Agency. Raised by a Village is a bit of a departure, focusing instead on the residents of Greenport, N.Y. As he explains in his Preface: “The people of Greenport fed, clothed, protected, and encouraged me, and they gave me a sense of belonging that those of my pedigree rarely experienced.”

Sullivan’s father died before he turned one, and his Irish immigrant mother worked as a cleaning woman. Although her meager income was supplemented by welfare checks, Sullivan, his older brother Bill and mother lived in poverty. Good nutrition and health care weren’t a high priority—a candy bar was often breakfast or lunch, and they were sixth-graders before they had toothbrushes—yet Sullivan was happy due to the support and love of the citizens of tiny Greenport.

People bought the boys clothes and took them on field trips; Mrs. Sullivan’s debts were often written off, and neighbors looked after John and Bill by offering them jobs or, in John’s case, helping him learn long division. Sullivan flourished as a result, earning a college scholarship and later his master’s degree, and forging a career that took him to 40 countries.

Sullivan’s writing style isn’t flashy; this is a straightforward narrative in which he mentions scores of people whose paths he crossed. Some contributed mightily to his survival; others were merely acquaintances. Most get a brief mention, though some, such as his brother and a few neighbors and teachers, receive a deeper look.

Overall, Sullivan paints an informative picture of small-town America during the ‘40s and ‘50s that might interest some general readers. But current and former residents of Greenport, as well as Sullivan’s family, will get the most out of Raised by a Village, his heartfelt tribute to the citizens of Greenport.
Also available in hardcover and ebook.