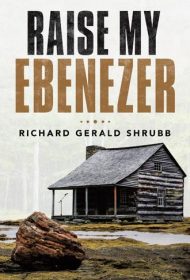 Raise My Ebenezer is an unconventional thriller set in the deep South between the 1960s and 2010s, recounting the life of 50-year-old protagonist Mark Anthony

Readers first encounter Mark in Madisonville, Louisiana, circa 2008, defending the honor of a waitress wronged by a violent stalker. After assaulting said stalker and getting arrested, Mark is court-ordered to therapy to address his anger-management issues. At Dr. Patricia Virgil’s behest, Mark composes a reflective diary to see himself “from a different perspective.” Immediately, the novel takes a cerebral left-turn, morphing from boilerplate, tough-guy thriller into a provocative meditation on the pursuit of happiness.

Using the diary to recount his lifestory, Mark identifies and reflects on milestones that helped shape his personality to gain insight into how he wound up so off course.

The novel bubbles with philosophical controversy throughout, channelling Dante Alighieri’s The Divine Comedy by way of any number of Chuck Palahniuk novels, in which likeable protagonists achieve self-realization by engaging in increasingly anti-social behaviours. The story features a number of scenes showcasing Mark’s ethical degeneration. Of these, the section in which he entraps a rapist is by far the most disturbing. Having drugged the rapist and wrapped him in a sheet, Mark offers him to former victim Andrea, who proceeds to goad the man with a provocative striptease before smothering him to death.

This is a psychologically savvy, occasionally shocking novel that paints a disturbing picture of masculine midlife crisis. On one hand, it’s a discomfortingly comic meditation on narcissism and the perils of self-actualization. On the other, it’s a confrontational allegory about the nature of justice filtered through the tale of one man’s descent into the deepest levels of corruption. Key to the novel’s success is grandiose protagonist Mark, a likeable anti-hero helped by the conversational intimacy of his first-person narrative.

Fans of tough-guy thrillers will want to avoid this story, but for readers seeking a challenging and subversive book, Raise My Ebenezer rarely disappoints.