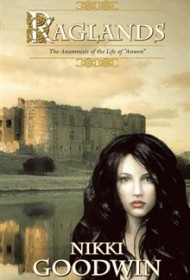 As Nikki Goodwin explains in the author’s note to her debut novel, the word “anamnesis” means “the recalled memory of a life.” Here she “recalls” the character of Anwen, a peasant girl in 1500s Wales who appeared to Goodwin in a vision.

Pure, good, kind and beautiful, Anwen is born with special powers that enable her to communicate with Mother Nature and the trees in the forest, and to practice the art of healing for those in her small village. The rural landscape is dominated by Carew Castle, where the aristocratic Blathaon family lives.

In the course of this mystical romantic saga, Anwen and the scion of the Blathaon family, Winn, (“so handsome that the breath was literally sucked from your lungs just by glancing at him”) fall in love, despite the social chasm that separates them. Just when it looks as though they will be allowed to wed, Anwen is raped by a village churl; as damaged goods, it’s clear that she will never be the lady of the castle, especially since she is pregnant with the rapist’s child.

In a scene of unparalleled camp, Anwen and Winn leave their bodies to enjoy sexual congress, slaking their human sexual desire by indulging in a spectral union in which “their souls were joined.” More mystical events occur as Anwen discovers she once lived in ancient times as a woman who died as a result of rape by the pharoah’s brother.