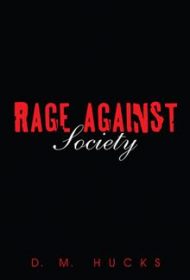 In this debut novel, author D.M. Hucks offers a doorstop thriller that combines the casual violence of The Hunger Games with the geopolitical intrigue of Tom Clancy, as well as offering an eerie battle in the heart of a child that echoes William Peter Blatty’s The Exorcist.

The book’s hero is Columbus-born teen Travis King, whose unstable father’s violent trespass against both he and his mother has inspired a crisis of faith. Travis, unbeknownst to his buddies, is under constant psychological assault by a menacing figure known as “The Entity,” or “The Doppelganger,” which sets up the saga as a pitched battle between God and the Devil, with Travis’ faith and America as the background.

Travis and friends Cole and Gage are trying to make their way in the world, but it’s an uncertain future. After the president is killed on Air Force One, the vice president is co-opted by wannabe fascist dictator Frederick Keplin. Their first act: ordering all teens into “juvenile rehabilitation camps.” Faced with rampant criminality and environmental disaster, the country soon schisms into the “Free States,” located in the Western U.S., and Keplin’s corrupt and vicious power base in Washington. Meanwhile, Travis and his friends face a military siege inside a mall in Illinois, as Travis becomes a polarizing savior figure for the country.

Despite its sprawling scope, the author deftly navigates between the teenage protagonists and the melodramatic goings-on in the halls of power. Readers of faith should respond strongly to Travis’ visceral spiritual crisis.  However, some may find the plethora of adult characters either to be insignificant or, in the case of Keplin, cartoonish, and many of the supporting roles are largely forgettable. The occasional spelling or grammar mistake is forgivable, but some moments, such as Travis’ uncharacteristic reaction to an infatuated girl, can be unsettling.

That aside, this massive dystopian thriller largely engages while singing the praises of God’s love, even as it depicts the cruelty of man.