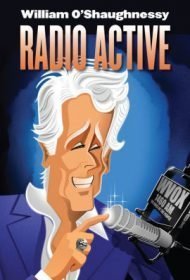 William O’Shaughnessy, owner and talk show host at community radio station WVOX-AM, has played an oversized role in New York politics and society for more than 50 years. From his perch outside New York City, the distinguished O’Shaughnessy has regularly hosted political big-wigs like Nelson Rockefeller, hobnobbed with neighbors like Jonathan Bush (brother and uncle to presidents), and asked conservative media mogul Christopher Ruddy, “What do you and Donald Trump schmooze about?”

His anecdotes told mostly at eulogies or high-profile events, are set in fancy locales or at high-end establishments such as the American Yacht Club and “fabled Le Cirque.”  His jokes are as predictable as they are reassuring: If he’s interviewing a Cardinal or Bishop, he’s sure to riff on the Franciscans, whose priests require “only three Hail Marys for anything up to a homicide.”

Most pieces are dated 2004 and later (though many are undated and without citation, reflecting careless editing), and there is undoubtedly some overlap with previous compilations, as one of this book’s ten sections is titled, with a wink, “The Obligatory Mario M. Cuomo Section in Every William O’Shaughnessy Book.”

With so much material of his own, it’s baffling why he includes dozens of pieces by like-minded peers, such as Rush Limbaugh. Also, the author says he prints compilations because people request copies of his remarks. It’s jarring, therefore, at the end, when he prints an uncharacteristically mean-spirited essay, “137 Real Reasons Why Hillary Lost and Trump Won,” apparently for the first time in this volume. Reasons include, “Fake news! …The New York Times…The Washington Post.”  This is a shocking allegation from a broadcaster of O’Shaughnessy’s stature, who stakes a claim to embodying “the Westchester County (NY) Establishment.”

In the end, the book’s readership is likely to fall predictably along partisan lines. Republicans now used to such talking points should feel right at home here. Others may find that O’Shaughnessy’s charm only goes so far.