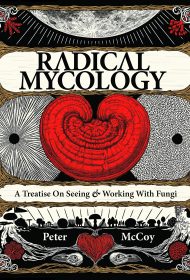 Named after the grassroots organization founded in 2006 by Portland-based author Peter McCoy, Radical Mycology: A Treatise on Seeing & Working with Fungi is a hefty, comprehensive guide and philosophical outlook on every dimension of fungi and their importance to life on earth as builders and maintainers of healthy ecosystems.

In 12 thematic chapters, plus over 100 mushroom and lichen species profiles, 17 appendices, a glossary, and bibliography, Radical Mycology covers everything from the complexities of fungal biology, evolution, and ecology, to methods and benefits for their cultivation, to the intersectional relations between fungi and humans throughout prehistory, history, and across cultures (including as food, drink, medicine, and in religion and spirituality), to fungi’s remediation applications for clearing human pollutants and contaminants.

Throughout, McCoy weaves his personal overarching perspective, based on two decades of cultivation and study, that fungi offer a potent model and pathway toward building healthier communities, both environmentally and metaphorically, as models of symbiosis, interconnectedness, and cooperation.

In this impressive and comprehensive work, McCoy’s passion for all things mycological comes through eloquently in strong, often poetic, and at times witty writing. It’s easy to get swept up in his view of the importance of fungi and their central role in making life on earth more possible and diverse. Even the more technical chapters, on biology, ecology, cultivation methods, and environmental remediation, are largely clear, succinct, and engaging, though at times sentences overloaded with complex material can overwhelm. Additionally, some technical terms aren’t clearly defined in the text. This would be helpful, even though they are in the Glossary.

The main handicap, though, is that at times McCoy tries to survey too much information in too little space and risks oversimplifying the topic, or introducing unintended mistakes. One example is the chapter titled “MycoGnosis,” on psychoactive fungi and human interactions, which presents the possibility of fungi influencing human evolution, especially the development of a consciousness expressed through spirituality, religion, myth, and art. Here, McCoy contracts the span of human evolution and, perhaps accidentally, presses a two-million year process into the last 18,000 years. Later, in a survey of cultures that have engaged psychoactive mushrooms, the coverage is too brief to give a clear understanding of any one culture.

Overall, however, Radical Mycology is an ambitious and remarkable offering to anyone wanting to comprehend in one reference the vast scope of mycology and its many intersections, benefits, and enhancements to life, health, and environment.