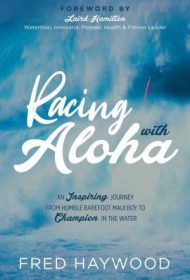 Fred Haywood won a national swimming championship and held a two-year world record in windsurfing, although few outside of those niches know his name. Perhaps that will change with Racing with Aloha, Haywood’s account of his successes both in the water and gliding atop it, along with lessons learned along the way.

In 1967, while still in high school (as was allowed then), Haywood won the NCAA national championship in the 100-meter backstroke. After graduating from Stanford, he returned to his native Maui. Haywood swam and surfed, started a real estate business, and opened a windsurfing shop. In 1983, he traveled to Weymouth, England, where he broke the world speed record in windsurfing.

However, his true fame in the sport emerged in 1984, when a Life magazine photographer captured Haywood surfing a massive wave at Ho’okipa beach in Maui. The resulting photo spread inspired Haywood to become a professional windsurfer, earning top money in the sport for the next decade.

Haywood is a solid writer, and his depictions of surfing and swimming exploits are energetic and concise enough to engage even lounge chair adventurers. Readers will relate as he illustrates overcoming academic struggles at Stanford and the atrial flutter (a heart condition) that cost him a spot in the 1968 Olympics.

The author also includes plenty of introspection. For example, he reflects on transitioning out of swimming, noting: “I say life is a process of elimination. Just like you clean your house at times to clear out the stuff you aren’t using…I believe in letting go of activities that no longer interest you…”

Regardless, Racing with Aloha is an engaging account of a life spent navigating through often choppy waters.