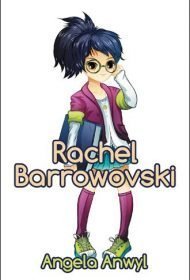 In Angela Anwyl’s middle-grade novel, a group of schoolchildren meet Rachel Barrowovski, the peculiar new girl who is hiding a secret.

Set in Cumbria, England, the story begins when a swarthy mystery man sends an ominous text message to Miss Sharp, a teacher at Hilltop School. Sometime later, the man escorts Rachel to Hilltop for her first day of Year 3 (second grade in the American education system).

Much to their dislike, Rachel outperforms her classmates in all subjects. However, their attitude changes one day when they’re caught in a thunderstorm and Rachel starts clanking and emanating smoke. Her classmates rush her to shelter, discovering she’s a robot about to short-circuit. Unfazed that their humanlike classmate isn’t actually human, they become loyal protectors of their new robot friend.

As the children go through their school-day activities, circumstances force Rachel to confess to her friends her real purpose as well as the man’s identity and their relationship.

The plot strives for intrigue, yet its details are imprecise. The man seeks to design evil robots to help him wreak revenge for past slights, yet he needs money to do it. Apparently, though, he has a bank of forged money and has previously created a team of robots. This creates confusion: Why does he need the money? And where are the other robots? The man’s prior successes and resources also render the motive for creating and bringing Rachel to Hilltop unconvincing.

The novel is aimed at middle-grade readers and could benefit from some line drawings interspersed throughout. American readers should also note that the story takes place in the UK education system; U.S. readers may not relate.

Rachel Barrowovski admirably emphasizes friendship and cooperation and shows how kindness can change anyone, but the writing requires greater clarity to attract an eager readership.