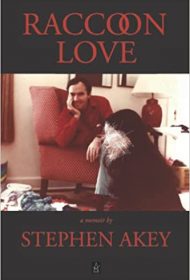 After only a few meetings, Akey and Lucy fell in love and settled down. They had met in the 1980s through a personal ad, a convenient way for an amiable, employed but painfully shy New Yorker to find a girlfriend. Although their marriage later disintegrated, the in-between years were filled with wonderful moments, including magical times spent in the Adirondacks. “We were like a pair of raccoons in their den: creaturely, warm, furry, and clinging to each other for love and security,” Akey writes of their early relationship.

Akey skilfully captures the raw emotions he experiences in his marriage and life: the desperation he feels watching his mother’s health deteriorate; his disillusionment when his marriage starts to disintegrate; the depression he carries from past trauma and from seeing his treasured relationship crumble. But sad moments are tempered by light, humorous ones, including a delightful conversation he has with his young son about dinosaurs and volcanoes, and his interesting, hilarious opinions of others, including Lucy’s hostile best friend.

The memoir also offers captivating philosophical discussions about topics such as ethnic and cultural identity, art, feminism, masculinity, love, and fate, with references to René Girard, Friedrich Nietzsche, Plato and others.

Akey reflects on what he could have done differently as a husband. Admirably, he never succumbs to easy answers. The result is an insightful memoir, sure to satisfy readers who appreciate nuance, honesty and love, however imperfect.

“Did we utterly fail? Are we merely a cautionary tale?” Akey writes. “Some will think so; for all I know, they may be right. Yet I firmly believe that being in love with another person and having that love reciprocated, however badly it may end, however briefly it may last, is the biggest, greatest, grandest thing that will ever happen to any of us.”