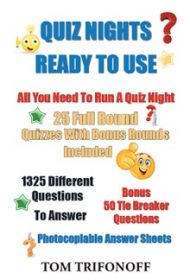 Ever wondered how many players are on a curling team? Or which Hollywood star was featured most often on the cover of Life Magazine? If so, you’ve probably participated in a trivia contest—or two. Quiz Nights is aimed at readers who enjoy such challenges, offering a cornucopia of mind-benders for trivia buffs and contest organizers alike.

The slim book contains 25 quizzes, each with 50 questions and three bonus questions, all suitable for a trivia night competition or something less formal. That’s 1,325 questions with varying degrees of difficulty. As author Tom Trifonoff explains, there are “[q]uestions that are really easy, questions that you will work out after a bit of thought, questions where you think there may be more than one answer (even though there isn’t) or questions you have no idea about and will take a very random guess at . . .”

A quick sampling bears him out: Which film actor was the most decorated American soldier in World War Two? (Audie Murphy); what plant does the Colorado beetle attack? (Potato);  how many arms does a standard umbrella have? (Eight).

The answers are provided in an easy-to-print format for contest organizers to hand out to each team, although we’ll have to take the author’s word on their veracity. (We discovered a few misspellings: for example, Trifonoff identifies Mad magazine’s poster boy Alfred E. Neuman as Alfred E. “Neumann.”)  Minor copyediting issues (such as missing or unnecessary periods) mildly detract from the book’s overall presentation.

Nonetheless, from movies to precious metals, to mythology, the book covers a variety of tantalizing subjects. For those planning trivia contests at their local bar—or anyone who simply wants to test and sharpen their mental acuity—this book is worth a look.