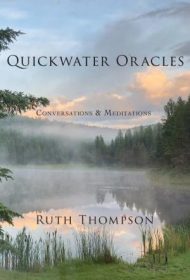 In a new collection of 101 vivid channelings, a published poet shares the communication she receives from the natural world: from beings real and fantastic, plants, water, stars, and the land.

Ruth Thompson knew from childhood she has an unusual ability for “merging with the natural world,” but she was conditioned to suppress it. When she freed herself from that conditioning by solitude, meditation, yoga, and writing poetry, she came to embrace her gift for channeling and allowed it to flow through her into her writing.

Here, she has organized her communications into eight sections with titles such as “The Doors Fly Open” and “Who Am I?” She channels her dog Duffy, dolphins, dragons, faeries, tornadoes, pine trees, a meadow, the desert, energetic force, and more.

Some pieces are prescriptive (in “Advice Before a Trip,” a nameless energetic force recommends “Do it all for pleasure!”). Some are descriptive (in “Bee Song,” the insects are “weaving the light like honey.”). Some read like affirmations (“Self Loving Self” opens with “You are a delight.”). Each piece reinforces that everything is connected, that living in the moment is enough, that love for oneself and all things will bring joy, which is the natural state of the Universe.

Thompson chose to include italicized comments of her impressions during some of these conversations, which interrupts the flow. Still, these pieces—some poems, others prose—are playful and sensual; they pulse with energy and convey a sense of repose. They’re better taken individually, rather than read in large doses, because the messages of Oneness and lovingkindness can feel repetitive and become monotonous if read one right after the other.

Encountered one by one, with time to re-read and meditate on the message, these pieces expand the reader’s mind to a new acceptance of the Universe’s breadth, depth, positive energy, and wisdom.