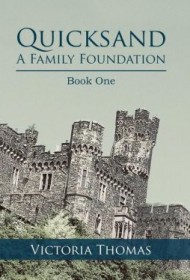 Victoria Thomas’ new historical novel, based on the author’s own ancestors, follows the passionate love story of a 19th century couple.

In 1870s France, 19-year-old toy designer Emma Bouron reluctantly accompanies her younger sister to a dance hall, where she meets 35-year-old English naval officer Joseph Head. It is love – and lust – at first sight between worldly, sexually experienced Joseph and shy, virginal Emma, who has kept to herself since her fiancé jilted her two years prior. Joseph’s and Emma’s steamy courtship leads to marriage, though not without obstacles along the way, including scheming fortune hunters of both sexes and Emma’s insecurities.

As they await the birth of their first child, Joseph’s military responsibilities call him away, leading to devastating consequences for the couple. Just when Emma seems to have put her life back together, she receives another shock that upends her world once again.

Quicksand is a spirited novel well within the family saga tradition. It provides an eventful, racy narrative and plucky, engaging characters. Although we know early on that Emma and Joseph will marry, Thomas supplies enough narrative twists to add urgency to their courtship. And Emma’s troubles in the latter part of the book are both wrenching and plausible.

The story suffers from a few flaws, however. The writing sometimes lapses into anachronistic dialogue (“Tell me you love me, baby,” “You owe me, buddy!”) and unfortunate turns of phrase (“He had literally been struck by lightning,” when a character is simply very surprised). Thomas also dwells at length on details of food and interior décor, while glossing over more unusual aspects of her narrative, such as Emma’s career in the toy industry.

The story holds much appeal, however, and lovers of this genre are likely to forgive the abovementioned issues. Overall, Quicksand should charm readers of Penny Vincenzi’s sagas and Fay Weldon’s Love and Inheritance Trilogy, and genre aficionados will likely be eager to read of this family’s further adventures.