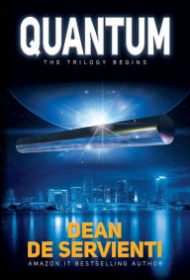 Quantum: The Trilogy Begins is the first in a series that has been translated from the original Italian, mixing thriller and mystery elements with a science fiction twist.

In the desert of Sudan, a pair of volunteer doctors discover a mysterious device dubbed “Quantum” by the expert scientists assigned to study it. They quickly conclude that Quantum is alien in origin, millions of years old, and possesses knowledge capable of shattering mankind’s understanding of their world. Members of the Israeli Intelligence Agency are eager to get their hands on it, which sets the CIA after them, putting Quantum’s handlers in danger and on the run for their lives.

This novel is smart and intriguing from the beginning, combining an exciting plot with numerous scientific and philosophical questions. The author trusts the reader’s intelligence and presents fascinating information to back up the plot with prose that reads cleanly even in translation.

The one major failing is that it doesn’t always balance this information well with the action, particularly in the first quarter of the book, sometimes even halting the plot entirely for pages at a time. Even the integral discovery of Quantum is brushed over in place of exposition that at times reads more like an academic textbook. Character introductions too, even for minor characters introduced late in the story, seem more like profiles than information seamlessly woven into the narrative.

Still, the exposition and facts are interesting to read. And the information dumping is toned down considerably once the action picks up, so it doesn’t hold up the story for too long.

Some readers may be turned off by the heavy amounts of exposition, over reliance on dialogue, and a somewhat disturbing incestuous romance subplot. Other thriller readers, however, will find this an exciting, thought-provoking and informative novel—one that offers a strong setup for the rest of the trilogy.