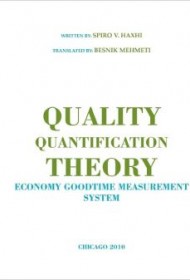 In this slim book titled Quality Quantification Theory, Spiro Haxhi, a former quality control specialist at a manufacturing plant in Albania, offers a complex treatise on the quantification of work, the qualities of work, the general well-being of society and the differences in the way these subjects are measured by individuals as opposed to government.

Despite a compelling introduction by Clint Maggard (no bio included) that sets the work up as a “revolutionary, economic, political theory,” the book itself is a densely-worded document that seems to span many disciplines (including the aforementioned economics and political theory), but doesn’t offer the necessary context and preparatory framework to be accessible to readers of any of these disciplines. There is no narrative structure to the book; rather the volume is written in outline format with short paragraphs that cover such areas as “Relative views (observations) towards of the object {sic}.” There are also charts and equations, often with little (if any, in the case of the charts) accompanying text to explain them.

In addition to the lack of a structure, which might make the work accessible to a broader category of readers, the stilted nature of the writing makes these complex ideas difficult to follow. This may be a result of the work of the translator rather than the author himself and can be seen in sentences such as this one: “In the same manner, another distinction between this study and the current understand of goods is the relational dependency on space (the market of sale).”

Haxhi does draw conclusions based on his theory in a final section, but their impact is greatly diminished without a discussion of the practical, or even theoretical applications of his ideas. A longer book, with far more explanatory text, is called for in order for general or academic readers to grasp the ideas that have been labeled “revolutionary” in this book.