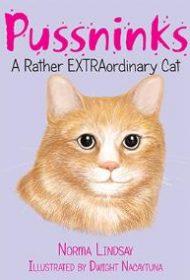 Pussninks is a tale about a beloved three-legged cat who refuses to let his disability hold him back.

In a colloquial tone, the narrator begins, “YOU may think [Pussninks is] different / But, let’s see him through HIS eyes…” After a quick mention of what sets Pussninks apart (“Pussninks has 3 legs”), it’s never mentioned again. Like any other cat, Pussninks plays with a mouse and with his cat and dog friends. He greets the mailman every day. He even steals a fish from his Grandad, then hops on Granny’s lap for a nice nap. The final message is sweet and simple: “Pussninks is no different / To any other cat / He chases, eats and sleeps / And that, he purrs, is that.”

The story is told in mostly-rhyming prose, and the simple language is a good fit for new readers. Happily, the message of inclusion never feels heavy-handed. Kids will also enjoy the colorful, detailed, illustrations; fittingly, they don’t emphasize that our cat hero only has three legs.

Unfortunately, the story is also hampered by some problems. While readers are told that they will see Pussninks through his own eyes, this doesn’t happen. An omniscient narrator describes Pussninks’ actions; we never learn what Pussninks thinks or feels. Additionally, characters aren’t introduced but just suddenly appear. For example, the first mention of Pussninks’ cat friend is this: “Bunty spied a cheeky mouse.” Readers must discern for themselves that Bunty is a cat by the accompanying illustration. The lack of context is jarring.

Finally, the wording can be odd, as in: “Grandad came across for tea” (came across from where?), and the text has no periods to denote the end of sentences.

Pussninks has an important and appealing message but requires more polish. With revision, it could be a nice way for parents to start a conversation with their children about those with disabilities.