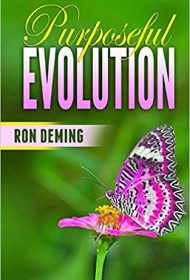 In Purposeful Evolution, Ron Deming argues that Earth’s biodiversity cannot be accounted for solely by randomness and natural selection, but must include some aspect of “purposeful evolution.”

Deming says that “purposeful evolution” happens when an “environmental stressor triggers the emergence of genetic changes that increase an organism’s survival potential.” While this is how evolution often works, he seems to argue that there’s intention behind it, rather than it occurring randomly in nature. Unfortunately, while stating that he is not discussing “creationism” but rather a “third option,” he never actually defines “purposeful.”

Despite using numerous examples from the natural and physical sciences, Deming displays a lack of understanding of how genetic variation, adaptation, and speciation work. For example, he argues that without “purposefulness,” the three species of pale-colored lizards living in White Sands National Monument could not all have developed the light color necessary to survive there during the geologically short 6,000 years the dunes have existed. He doesn’t mention the enormous genetic variety that exists in any species population accumulated over immense reaches of time—often millions of years—that allows for this kind of convergent evolution.

When discussing the process of speciation, he writes: “…when the first generation occurred for species with dependent offspring…[parents] wouldn’t have known of their offspring’s reliance on others…if at least some purposefulness didn’t exist.” Deming seems to think a new species shows up in one generation overnight, which is decidedly not the case.

Despite the text’s scientific tone, there’s no thesis statement to guide readers, no references, notes, glossary, bibliography or index. Additionally, Deming never offers a countering point of view. In the final chapter, he argues that our universe exists as it does because of a purposeful intent to bring about life. He ignores another possibility: that life is simply a byproduct of the universe as it is.

Intelligent design advocates may embrace Purposeful Evolution. However, readers with a science background will quickly spot the text’s flaws.