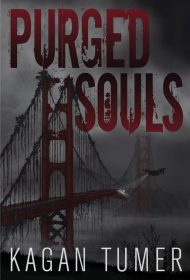 In Kagan Tumer’s futuristic thriller, Purged Souls, California descends into a state of chaotic war a quarter-century after a virus decimates the state.

A professor of robotics and artificial intelligence, Tumer introduces a chilling, gritty and realistic dystopian future. The setting is California, although entirely unlike the one we know. New California is divided and at war, reluctantly ruled by Governor Amy Chipps after her predecessor’s assassination. The capital stronghold of Cal City is squeezed between the menacing community Kern to the immediate south, the matriarchal Marin to the north, and Santa Cruz and San Jose representing the other two of “four islands drifting in a sea of violence.”

We eventually learn this is 25 years after “The Purge,” a devastating disease caused by an extraterrestrial virus, carried upon a comet. The Purge not only wiped out much of the population but also crippled humankind’s ability to reproduce. In the aftermath, resources have become scarce.

At the story’s center is Colonel — soon to be General — Lori Rose, a battle-hardened soldier fighting to keep all of California from descending into chaos, and Mika Bayley, a resourceful and talented spy who works to uncover fundamental intelligence about the bigger picture. At stake is not just territory and resources but mankind itself, as one faction considers deploying a bioweapon called AHtX, a new strain of the devastating virus.

Punctuated by quotations from the likes of Rosa Parks and Henry Thoreau, the story leans towards talk-heavy political drama in the vein of The West Wing or 24. It also offers intriguing world building focusing on the approaches the various sides take to the fundamental catastrophe. It’s dense and dialogue-heavy, commanding readers’ attention while not exactly achieving page-turner status.

Neither as elegiac as Edan Lepucki’s California nor as inquisitive as Colson Whitehead’s Zone One, Purged Souls nevertheless confronts readers with an intriguing introduction to a frightening vision of humanity’s potential finality. The next installment in this series is coming soon.