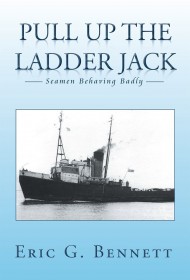 Eric G. Bennett spent more than a decade as a British Merchant Seaman, beginning the day after his 14th birthday in 1945. On tugboats and tankers, passenger ships and freighters, Bennett crisscrossed the globe, sailing from his native England to South America, Africa, the Persian Gulf, and virtually everywhere in between.

Clearly, Bennett has stories to tell. And tell them he does, in Pull Up The Ladder Jack: Seamen Behaving Badly. The book is aptly named. When “the lads,” as Bennett refers to himself and his mates, aren’t mouthing off to superiors, cadging drinks at ports of call and throwing punches, they’re sneaking on and off ships, nursing hangovers and racking up fines for all manner of petty offenses.

The book is divided into 25 chapters, one for each ship on which the author sailed. Each chapter opens with the ship’s history and specs: “The TES Tresus (original name Lauren Hill renamed Tresus 1947.) ID 2246799. DWT 16613, built by Kaiser at yard 98…”

Bennett describes the workings of the ships and his duties in detail too technical for average readers. While he includes a glossary of nautical terms, weaving definitions into the text might have helped enliven it.

For a man whose formal education was presumably cut short, Bennett writes reasonably well. But he gives short shrift to the detail that might broaden his story’s appeal, as in his description of a Christmas at sea, which reads, in its entirety: “A terrific Christmas dinner!”

Political correctness had yet to be invented during Bennett’s years at sea, and it’s nowhere to be found here. Gay men are “queers,” women are “Senioritas,” “business girls,” and “nice-looking dames.” On at least one occasion, given enough pints, the lads have trouble telling the two apart, a reminder in the future “to always check for an Adam’s apple, facial stubble, or a bulging crotch when dating girls.”