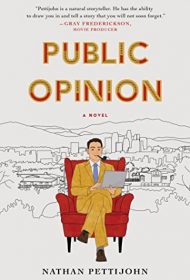 Melvin Ritkin (readers learn later in the book that this is not his real name) is a hacker extraordinaire who can get Tinseltown’s elite out of – or into – the worst situations. As the novel opens, Melvin saves an actor from a ransomware hacker who is actually none other than Melvin himself. This supposed rescue endears him to the actor’s coterie, including director Titus, a classic Hollywood degenerate. When Titus’s current film production runs into trouble – from a death on location to poor reviews – Melvin takes increasingly nasty and illegal measures to smooth the way for him. Meanwhile, Melvin also helps an acquaintance methodically destroy the reputation of a concert promoter who wronged him.

Public Opinion is a scabrous dark comedy, firmly rooted in the tradition of Bruce Wagner’s Hollywood novels. Although the content and its over-the-top licentiousness will likely offend some readers, others will delight in the goings-on and the breezy delivery— and wonder where on earth Pettijohn will take them next.

Unfortunately, the story also features several digressions – such as a long expository stretch of dialogue about the Marquis de Sade, on whose work Titus’s film is based – that derail its momentum. The romance with Ruby is another weak point, as she seems too shallow and irritating for her assigned role as the moral center in Melvin’s life.

Streamlining the narrative and better developing Ruby’s character would help the book appeal to a wider audience. Still, Pettijohn has crafted an enjoyable jaunt through the vagaries of human nature.