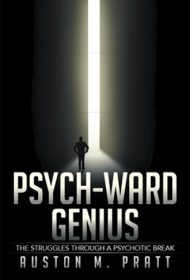 Mental illness can be uncomfortable to read about and challenging to capture in words. Author Auston M. Pratt had the foresight to keep a journal during a period in his teens while he was being treated for bipolar mania as an inpatient. His book recounting that time, Psych-Ward Genius, is intended to inspire anyone in the same position to believe that things will get better.

Chapters are short, and there are no paragraphs, just blocks of uninterrupted text. This is initially overwhelming. Additionally, the text includes frequent Bible verses than can make the narrative seem like an extended sermon.

But readers will soon acclimate to the author’s style and appreciate Pratt’s soul-baring approach as he recalls a scary and humbling time. He describes periods of mania, when his mood soared, then writes about the tedium of depression, worrying that his medications are making him fat and tired all the time. The straightforward accounts of his feelings can be heartbreaking but also hopeful: “When I had my setback, it made me feel depressed and confused. But I soon realized that it was a fresh start at something new.”

While the text flows well overall, the narrative includes a few misspelled or misused words. Also, because this episode took place a decade ago, it would have been helpful if Pratt had included a brief update on his condition, as it’s impossible not to care about this young man.

Psych-Ward Genius is short, and its mood changes can be jarring, reflecting the condition Pratt describes. But it’s an accurate first-person portrayal of bipolar disorder. Young people facing similar struggles will find Pratt easy to relate to and an encouraging presence, transparently honest about the good times as well as the bad.