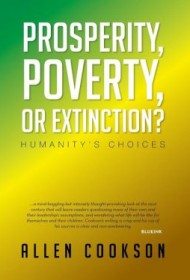 In this hefty volume titled Prosperity, Poverty or Extinction?: Humanity’s Choices, Allen Cookson, a former science teacher from New Zealand, synthesizes an enormous range of materials from the social and life sciences in order to look at humanity’s future — which he sees as in jeopardy due to poverty, starvation, war, global warming and other factors — and its options for avoiding the dire consequences noted in the title (poverty and extinction). He does this analysis through two schools of thought: one made up of classical economic principles, the other composed of a larger range of thought from natural scientists, ecologists, members of non-governmental agencies and others.

In producing this broad survey of the current state of humanity, Cookson covers everything from economic principles, including mainstream economics and the Post-Autistic Economics movement (a broad coalition of economic theories that includes the viewpoints of environmental and feminist economists, as well as others), to food production theories, energy options, land use, population issues, global politics, and a score of other factors. He concludes with a snapshot of a possible future for Australia, Bangladesh, Brazil, Canada, China, Denmark, Egypt, German, Iran, Kuwait, New Zealand, and the US in 2112 — a future that offers reasonable solutions for many of today’s greatest problems, including global warming, overpopulation, trade disputes and other quandaries.

The result is a mind-boggling but intensely thought-provoking look at the next century that will leave readers questioning many of their own, and their political leadership’s assumptions, and wondering what life will be like for themselves and their children. Cookson’s writing is crisp and his use of his sources is clear and non-overbearing. His book is likely to appeal to readers interested in the intersection of social and life sciences as they relate to the future.