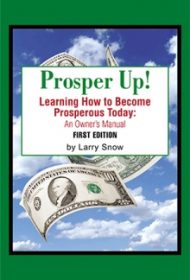 Larry Snow offers advice on achieving prosperity in Prosper Up! Learning How to Become Prosperous Today.

When it comes to offering financial advice, some books get bogged down in the technical aspects of finance; others seem to approach the subject with the intent of providing a general introduction. Prosper Up! falls into the latter category, but unfortunately falls short of the goal.

While Snow’s writing is candid and cheery, the narrative is occasionally plagued by errors, such as the heading “What It Takes to Building [sic] a Higher Level of Prosperity.” More troubling, however, are sentences that effectively cloud Snow’s meaning. For example, on page 252, he writes: “It is simply not true that people can become prosperous by saving a certain percentage of their income each month.” Oddly, regular savings seems to be his emphasis throughout much of the book. And the next line appears to contradict the first, reading: “The accompanying charts prove that this process does, in fact, work for anyone who is willing to do it on a regular and consistent basis.” Adding to the confusion is the fact that no “accompanying charts” appear anywhere in the chapter.

Throughout, Snow offers long lists of basic, often repetitive, advice, such as “The Thirty-Four Absolutes That Are Necessary in Building Your Personal Prosperity.” Meanwhile, his guidance on investing in the stock market is dangerously oversimplified, instructing readers to limit their holdings to six or seven stocks, or one mutual fund, which isn’t in keeping with generally accepted guidelines of stock investment allocation.

There’s good advice to be found in Prosper Up!, as when Snow recommends keeping a list of the contents of one’s wallet or purse, in case of theft or loss. But overall, the book doesn’t do much to simplify personal finance, or in this case, “Personal Prosperity.” Wordy and sometimes puzzling, the book’s main function seems to be to funnel readers toward Snow’s associated websites for more information and additional purchases.