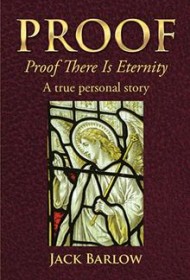 In this slim religious volume, Jack Barlow chronicles his spiritual encounters as proof that God and heaven exist.

Barlow had always been a believer in the power of prayer, so he wasn’t frightened when spirits began visiting him on the eve of an operation at age 74. On the contrary, he says, “For me, they were blessed and sacred events.”

The visits have continued for more than 10 years, from unknown spirits and departed family members alike.  He recognizes them by their appearances: His first visitor, who wore bobby socks, he believed to be his sister who died at age 15.  He has had one visit from Jesus, who raised his hands in blessing, and one visit by a demon. None were threatening. Although these spirits don’t speak to him — they vanish with the light — he has observed them in the midst of some earthly behavior: his mother fluffing his pillow; his guardian angel Gabriel sniffing a flower on his nightstand.

Whether or not the reader is a believer, Barlow is obviously earnest in his intentions. However, his writing is curiously devoid of emotion.  For example, in the passage labeled “The Twenty Sixth Night,” Barlow writes, “Lights out. The evening was rather uneventful. Lee’s mother appeared next to her dresser. I waved-and then she waved and vanished.”  The encounters are interesting, but the author never scratches much below the surface in the telling, i.e.:  Why does he think his wife’s mother is a frequent visitor? Or, why doesn’t his wife find the spirits – which she can’t see – a little unsettling, since they appear while she’s sleeping next to her husband?

With more compelling storytelling, Barlow might have targeted a wider audience. As it is, the book is most likely to appeal to those looking for a quick read who are open to pondering the many unknowns in the universe and who might take spiritual comfort in Barlow’s observations.