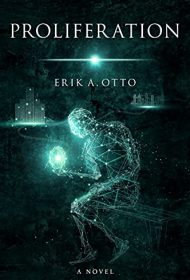 Proliferation focuses on the mysterious re-awakening—by unknown parties—of dormant, artificially intelligent machine-city Haplopol and the race to control it by ideologically opposed nations.

At the story’s center is Lexie, a pirate rebel-girl from the city of Anacortes. Lexie is pressured into collaborating with a tech-savvy monastic-order of Observers as they mobilize their resources to ensure Haplopol, and four other similarly intelligent machine-cities, don’t fall under the control of their warmongering Essentialist neighbors.

Meanwhile, alcoholic, machine-city scholar Dryden, a coastal Essentialist with a tragic backstory, is enlisted to advise fundamentalist group The Prefectorates, led by General Hatsuo. While Essentialists abhor Old World technologies, Hatsuo seeks to utilize Dryden’s knowledge to take control of Haplopol as a step toward seizing control of other regions surrounding those of the coastal Essentialists.

The novel’s worldbuilding is commendable, delivering a haphazard planet, full of pre-industrial maritime mise-en-scene and architectural curiosity. Strewn across the surface—and occasionally buried beneath—is a hodgepodge of science fiction paraphernalia, energy weapons, and busted Old World gadgetry. This is a world reconciled with retrogression, where the conflict lies in whether to safeguard leftover technology or employ it for nefarious means.

There are many moving parts to the story. Fortunately, it takes time to self-organize, allowing readers to familiarize themselves with its complexity. Early chapters meander, though once the pace quickens, it rarely lets up.

While there’s plenty of engaging action, the novel is also a thematically rich, entertaining read—partly a study in mankind’s problematic relationship with advanced technologies and the implications of technological dependence.

Lexie and Dryden are sympathetically drawn, and the narrative is rife with well-rounded support-players. Although protagonist Lexie is prone to comic-book style exclamatory outbursts (“Nauseous nettles[!]”; “Bilious buildings[!]”) and there’s occasional expository discourse to ensure narrative coherency, character interactions are believable and advance the plot.

In sum, Proliferation is sprawling, immersive post-apocalyptic fiction, packed with intrigue and ideas, with plenty to recommend it for dystopian science fiction fans.