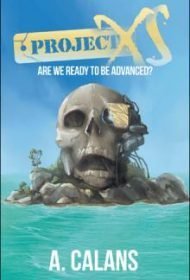 This military science fiction tale revolves around a group of six SWAT, military, and special forces individuals sent to an island off the coast of Tokyo on a secret mission.

During this mission, the team discovers that the U.S. Army is developing a truly monstrous secret weapon, which they have been selected to test by inserting themselves into a nine-foot tall, robotic exoskeleton with hyper-human abilities. The Army wants it to be their ultimate weapon. As the mechanical monster begins to display erratic, threatening tendencies, the six special agents and their sergeant-trainer reveal their own troubled, and for some, troubling, backstories— of unbearable guilt, opioid addiction, and PTSD.

The imaginative plot owes a clear debt to Mary Shelley’s Frankenstein. In this tale, the monster is the creation of a software engineer, Michael Sevchenko. With a computerized, metallic, mechanical body, combined with artificial intelligence, it wreaks havoc on the island, on the freighter it seizes to take it to Tokyo, and in Tokyo. When it seizes its creator, whom it calls “my god,” it demands consciousness and complete independence: “The machine slowly wrote in blood on the floor, ‘ULTIMATE UPGRADE.’ Then it grabbed Michael with one arm and lifted him up, leaving stains of blood on his shirt.”

While this is an interesting twist on the classic tale, its telling falls short of its promise. The author relies on the “tell,” method too often, rather than showing the characters in action, as in: “Some bullets hit Sevchenko, causing severe internal injuries.” And because the author is writing in what seems to be a second language, use of British phrasing by a Texan/Mexican character (”we signed up straightaway”), abundant tense issues, and missing conjunctions like “the,” “an,” and “a,” greatly mar the reading experience.

Ultimately, the story requires a thorough line and copy edit from someone whose primary language is English before it can attract a widespread audience.