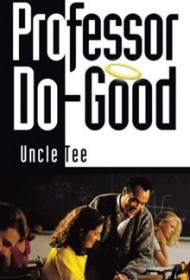 When George Martin, a black student at the University of North Carolina, is caught illegally checking out an administrator’s computer by white student Daniel Vermin, Martin accuses Vermin of being a co-conspirator. They are brought before a university senate hearing, which attracts national attention because of the possible racial implications.

But a black professor at the university, Professor Miles — known as “Professor Do-Good” — finally gets to the truth after confronting Martin at the hearing. Years later, Vermin has an opportunity to return the favor when the professor’s son is battling prejudice on the high school badminton court.

According to the prologue, this novella hopes to point out the destructive forces that fan the flames of racism. “It is in furtherance of this war against racism, and in determination to win, in other [sic] to keep the one multi-colored and peaceful global family of man together that this story has been told,” writes the author.

Unfortunately, author Uncle Tee is so intent on his message that he overlooks some basics needed to advance his story. Characters come and go, never to be seen again. And the book needs a copy editor desperately: “At the table,” writes Tee, “the Miles did not discuss about the finals, but obviously, there was a synchronized feeling to discuss it, but no one was ready to be the one to take-off the lid.”

Despite the author’s interest in badminton, a central element in the book, it’s hard to believe that “both the electronic and the print media had done a good job in the publicity of the competition.” High school badminton? Not likely. The badminton game, though, is a clever device to bring the conflict to a climax. The novella is really more like a fable, with Uncle Tee gently lobbing his morals over the net until the fanciful end.