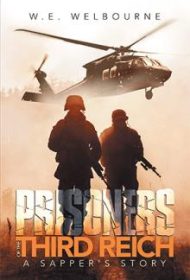 Prisoners of the Third Reich, the tale of an Aussie “Sapper” (a soldier responsible for building roads and bridges, laying and clearing mines, etc.) captured in Crete in 1941, lays bare the daily life of a POW in WWII German prison camps.

W.E. Welbourne details the life of his uncle Arthur (Arty) Dawson, drawing heavily from Dawson’s war diary. Written in his uncle’s voice, the narrative takes readers from Dawson’s growing up in Lambron, New South Wales, through his military training, wartime experiences in North Africa, Greece and Crete, and capture and imprisonment. Dawson escaped three times. Unlike the first two, in which he was recaptured, the third escape—in spring of 1945, from Stalag VIIIB in the Sudetenland with the help of Czechoslovakian Resistance fighters (and a terrifying lift on a Russian tank column)—was successful.

After that, though, more worries confronted Dawson. After six years where a starving man’s constant search for food took precedence over everything else, where lying and theft were not only acceptable, but necessary to survival and constant paranoia reigned supreme, Dawson wondered: when he finally was shipped home and saw his family, “Will I be able to cope with this? Will they be able to cope with me?” Not everyone could cope: After release, one of Arty’s POW brothers drank himself to death.

The daily life of a soldier has often been described as “periods of utter boredom, punctuated by periods of sheer terror.” In its unique way, that of a POW follows this pattern, and Welbourne skillfully portrays the hour to hour, day to day challenges. The book is long, but easy to read, with simple and straightforward writing.

Some will find the beginning, about Dawson’s upbringing, less interesting than the remainder of the book. It could have been easily trimmed, with the narrative focusing on the war and post-war years. Additionally, the aircraft and weapons pictured on the front cover, the aircraft on the back cover, and the helicopter image (a Huey) decorating the beginning of each chapter are unfortunate choices, since they didn’t exist in WWII and will put off readers familiar with the period.

Nonetheless, if you want a sense of what POW life was like in WWII German Army prison camps, this over-long, but surprisingly engaging and easy-to-read biography should find its way onto your reading list.