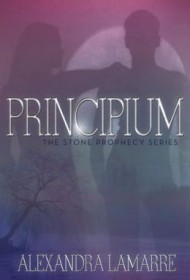 In this first book in Alexandre Lamarre’s young adult Stone Prophecy Series, a young girl wrestles with her magical heritage, discovers her nascent powers and battles a vampire-demon hybrid.

Fourteen-year old Kiarra doesn’t remember much about her mother, who died when she was only two. She does know that her mother was a powerful leader in the Stone clan, a centuries-long lineage of mostly female witches. Her father is a member of the Johnson clan and has taught Kiarra magic since she was a child.

A la Harry Potter, Kiarra receives a special invitation to attend Hollow Institute for Gifted Young Women, a school that teaches all things magic: rituals, history, potions. Going against the wishes of her father, who claims the teachers there are “weak and misinformed,” Kiarra is soon on her way to the institute. There, she meets Kasy, her warm, fun-loving roommate, and they quickly become friends. When they, in turn, meet Xander, from the neighboring boys’ school, the three form a close friendship.

Soon, things turn dark: Around campus, “familiars” (a.k.a. pets) begin disappearing—or are found savagely killed. The three friends become detectives of sorts, discovering that the Feuer, a vampire-demon hybrid, is behind the mutilations.

Lamarre has done a fair job of establishing the conventions of this fantasy world, however there are many details that go unexplained and seem arbitrary, such as when she writes, “he touched her forehead and chanted in Hungarian” — but offers no reference to Hungary or anyone who speaks Hungarian in the rest of the book. Occasionally, she makes descriptive word choices that result in awkward writing (“a dark frown marred his features” and “[she] smiled in fatigue”). Lamarre’s strong suit is in the development of interesting characters.

Overall, the story is in need of a bit of magic to cure its technical ills. Even so, the author has managed to create a varied and quirky cast that should appeal to young readers.