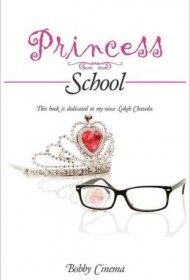 There’s something universally appealing about a Cinderella story. Who can’t get behind a trod-upon underdog finding love and fame — and besting mean-spirited rivals in the process? Author Bobby Chavala, writing under the pen name Bobby Cinema, spins the familiar yarn but this time with a man as the commoner who finds himself swept into royal intrigue – all with a little help of an Internet chat room.

Despite its stock characters and made-for-TV-movie predictability, Princess School is nonetheless well written, well told, and, frankly, quite charming. Probably best suited for younger readers, it’s akin to the likes of The Princess Diaries and the movie What A Girl Wants.

In this modernized male version, Everyboy Billy is whisked off from his middle-class home in California to the Netherlands at the secret request of his cyberspace pal. Because they have never met in person, he doesn’t know that the lonely, misunderstood teenager he knows as Linda is actually Princess Linda, expected to find a mate and ascend to the throne.

He thinks the odd invitation to attend Princess School is all an elaborate prank by his friend and is suitably befuddled when he steps into the palace of a foreign king. The usual mistaken identity chaos ensues as Billy is thought to be a prince attending the special crash course in royal duties.

Along the way to falling love with Linda, he encounters a villainous competitor who he one-ups by simply telling the truth. There’s no glass slipper in this tale, but there’s a nice message about young people – male and female, royal and commoner – learning to stick up for who they really are, even at the risk of disappointing others.

In the author notes, Chavala states that he is autistic and has faced many rejections. He dedicates the book to his niece. It’s not hard to imagine that through this fairy tale, Chavala is imparting a few important lessons from his own life.