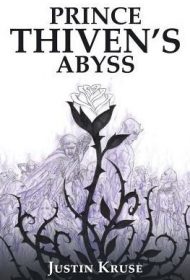 Prince Thiven’s Abyss is a sword-and-sorcery fantasy about a prince’s quest for love, acceptance and the secret to being a great leader of his kingdom.

Thiven’s life as the prince of Sornum and his engagement to the beautiful Eraia are thrown into chaos by the invasion of the goblin army and vicious demons known as krin. He must recruit a group of warriors, including an old wizard wielding the legendary glass sword, to go with him into the mines of Edlan and destroy the enemies. While he is away on his quest, Eraia and her family are subject to brutal attacks, and with each trial, it seems less likely that Thiven will make it out of the abyss in time to save her.

The book is clearly influenced by classical fantasy and mythology, though an unusual debate over the morality of witchcraft interestingly breaks the mold. Still, the classical influence results in a book that relies upon outdated clichés and character archetypes with little if any originality. For example, Eraia, the only prominent female character, goes through a poignant arc of betrayal and trauma but otherwise doesn’t serve much purpose other than a damsel-in-distress stereotype for Thiven to rescue.

The writing suffers from technical issues: Too many sentences begin with “then,” for instance, and the narrative contains many spelling and grammatical mistakes. Additionally, integral parts of the story, such as the death of a major character, are glossed over and poorly described, devoid of sufficient emotion to generate interest. Other characters are introduced all at once, almost like encyclopedia entries, instead of being naturally integrated with the flow of the story.

Fans of classic fantasy might appreciate some of the story’s unique touches, such as the witchcraft debate, but given its many issues, it’s unlikely that the story will garner widespread interest.