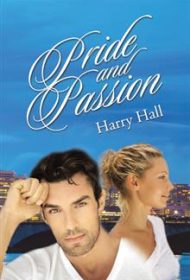 A heartfelt romance spanning more than a decade, Pride and Passion is a story of success, heartbreak, and ultimately, true love.

Penny Kilmer and Tyler Harrison were high school sweethearts and one another’s first loves. Sadly, they fought and broke up under very unfortunate circumstances. The teenagers moved on to college and beyond, but their love remained, no matter how hard each of them attempted to deny it.

As time goes on, Tyler graduates college and within just a few years becomes an extremely successful real estate entrepreneur, while Penny teaches in their hometown in West Virginia. Penny realizes that she made a mistake, and wants Tyler back, but he is in a relationship and still hurt from their break-up.

As the story unfolds, these two characters will endure tragedy, heartache, and a couple of brushes with death as they work their way back to a relationship. Even after they finally reconnect, their path to happiness is not an easy one.

Penny and Tyler’s story takes place over more than ten years, and that’s a lot to pack into a single book. Time is taken to fully develop both characters, as well as important secondary characters such as Geena, a girlfriend of Tyler’s, and Alice and Tracy, his close friends. Tyler is a perfect romance lead, handsome and successful, and it’s difficult not to fall in love with smart, sassy Penny.

Unfortunately, though, the pace of the story drags, especially in the beginning, and the plot is often bogged down by a surfeit of details about Tyler’s business. There are also so many surprises and dramatic moments packed into the narrative that they threaten to overwhelm the story.

Although the book has flaws, when Tyler and Penny finally find each other again, sparks fly and their relationship is punctuated by chemistry and sensuality. As a whole, Pride and Passion is a second-chance romance that may appeal to readers who have the patience for a slow build that leads to a powerful ending.