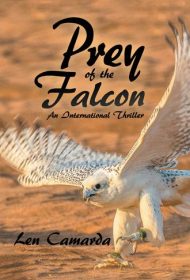 When two college students, both daughters of prominent, influential parents, are kidnapped in the Middle East, the American detective and Spanish policeman who headlined author Len Camarda’s The Seventh Treasure use every resource possible to unearth these young ladies’ location and unravel their strange situation.

Captain Mercedes Garcia of the Spanish National Police Force and former U.S. Secret Service agent Gene “Gino” Cerone met when they investigated the mysterious death of Gino’s beloved sister in a roadside accident. Now the American investigator has been seconded to the Spanish police force under the umbrella of the FBI, and the two have become lovers, as well as investigative partners.

Their new case involves two bright college students, Paz de la Cruz and her friend Frankie Fontana, who have disappeared under mysterious circumstances. It would be a spoiler to explain the plot in full, but the central conspiracy involves something called the Saqr Network, which identifies brilliant Western female students for a very specific cause. While this is human trafficking, it’s a pleasant surprise to find that these young women aren’t being kidnapped for prostitution, but something more altruistic.

The bad guys are from the Middle East, with the vortex of the conspiracy based in Dubai, in the relatively liberal United Arab Emirates.

This is a talkative but very readable police procedural. While Garcia and Cerone are the main characters, they also bring in the FBI, Interpol, white hat hackers and other good guys to combat, among other villains, a completely guilt-free terrorist, an Egyptian assassin, and a conflicted sheik, not all of whom face punishment in the end.

There’s little action here, but the writing is solid and it’s obvious the well-travelled author knows these cultures and draws on influences from a variety of iconic sources, not least Arabian folklore. The book doesn’t have the riveting quality of a Bourne movie, by any means, but Camarda’s compassionate characterization and steady investigative logic are intriguing and worth pursuing for thoughtful fans of international thrillers.