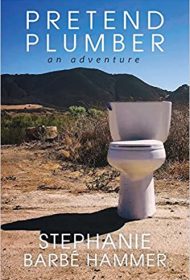 As usual, Sarassine’s parents aren’t there to help when a major plumbing problem erupts at their house. She decides to run to her grandfather’s condo, but not before her cranky, ever-suspicious grandmother arrives and accuses Sarassine of causing the problem: “YOU BROKE THE PIPES with your make up and your marijuahna…,” she says.

Shortly thereafter, two camp counselors appear to take her—against her wishes and at her grandmother’s suggestion—to a Jewish camp for “Wayward Youth.”

Sarassine accepts her fate and quickly makes friends, spending most of her time with Hannah, a girl she develops a crush on. Due to an earlier mix-up, the camp counselors believe Sarassine is gender-queer and transitioning. Sarassine plays along: “I can swagger and act like a boy all I want ’til I figure it out.” Then, when a power outage shuts down camp, Sarassine and five others flee in a camp van, only to run out of gas at a Jewish retirement home, where her adventure takes a strange turn.

Sarassine narrates the story, which grows somewhat convoluted as it progresses. She mentions Jewish terminology and traditions, explaining these further in often-amusing callout boxes. The Jewish practice of Kabbalah, a mystical interpretation of the Bible, also figures into the plot. While this dive into magical realism is somewhat disconcerting, it works to bring a satisfying close to the story.

There’s also an interesting connection made: Sarassine has always dreamed of becoming a plumber; coincidentally, her grandfather’s life was saved by a German woman pretending to be a plumber.

Young adults will enjoy this imaginative, thought-provoking, and funny story.