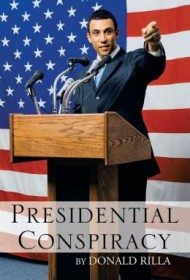 Chip Wilson is a Congressman fed up with the inability of Congress to get anything done. With the support of his fellow Tea Party members, he decides to challenge Republican senator Ted Lancaster for the party’s presidential nomination. But when a vague threat surfaces against one of the men running for president, the FBI, CIA, and Secret Service must act before this man is murdered.

While this sounds like the outline to an engrossing thriller, the story is overloaded with presidential election procedural and policy information, to the point of overwhelming the narrative. The character and plot development get bogged down in unnecessary details, everything from the workings of campaign finance to the minutiae of presidential debates. (Consider this: “T.V. ads reflected the new leader’s position on a wide variety of topics ranging from a history of a Candidate’s [sic] background, voting record, previous statements made, deficiencies or weaknesses and other non-public considerations, such as sexual preference, marital status, family history…”

Additionally, the book could use an editor’s keen eye: Grammar, spelling, usage, and punctuation errors abound. For instance, the author uses the phrase “garnishing nearly 60% of the voter’s [sic] approval” instead of “garnering” (note the misplaced apostrophe in voters’), and misspells “Iraq” as “Irac.” Finally, much of the text, though not all, appears in bold font for no discernable reason.

In the end, it’s difficult to get over all the editing issues here. Some readers may not be bothered by the constant distractions, but most will find it hard going. What’s more, there are more details about politics and policy in the book than there are plot-moving devices. As a result, fans of political thrillers are likely to find the pace far too slow to remain engaged and set it aside before the conclusion.