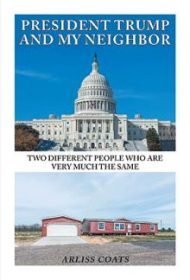 If someone gets under your skin, it can be helpful to find a point of comparison. When author Arliss Coats and his wife moved to eastern Washington state to start life over, they were confronted with the proverbial Neighbor from Hell, and for Coats, the resemblance was clear. President Trump and My Neighbor: Two Different People Who are Very Much the Same is what the title implies: a discussion of two men he feels share similar traits.

For the first 23 pages, Coats describes meeting his wife and the series of health setbacks and circumstances that led them to buy some land with a manufactured home on it. Their neighbor, who he calls “Mr. Dumb,” drives loud motorcycles and ATVs, runs an illegal business on his property repairing vehicles, threatens Coats and throws garbage toward his property. Law enforcement are reluctant to get involved.

At this point in the narrative, the book shifts to a list of complaints about the president, interspersed with stock photo images and reproduced political cartoons.

Coats has a legitimate grievance; if his neighbor has done only half of what’s alleged, he still sounds like a nightmare. What’s lacking is an effective narrative arc. When the story turns to President Trump, the pivotal chapter is titled “Why is your president so much like my neighbor?” But instead of a detailed analysis of this idea, the chapter devolves quickly into a discussion about the author’s grievances toward President Trump.

The book proceeds in this manner, sometimes interspersed with comments addressed to readers about the writing process (“I don’t remember if I have mentioned this before, but writing this story is starting to get a little crazy.”)

It was no doubt cathartic for Coats to detail these resentments and criticisms of both men, but reading his book is like listening to your own neighbor launch into a long-winded political tirade. Even if you agree with him, you soon find yourself wishing it would end.