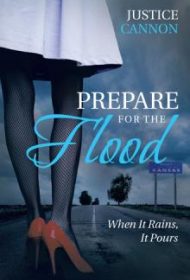 Justice Cannon’s memoir Prepare for the Flood is marked by violence and heartbreak—as well as a narrative that confuses more than it illuminates.

Early on, we learn that the author is a young black woman raised in Kansas by relatives, foster care and group homes after her drug-addicted mother was imprisoned for murder. Through her school years, she was sexually molested by adults, introduced to alcohol and drugs and had multiple sexual partners and abusive relationships. By 19, she was living in the projects with her two small children. She had earned her G.E.D. but sold drugs and stripped to make a living.

In later pages, she states her belief that Satanic games she played in a group home with other teen-aged girls sparked the misfortune she’s suffered since. She also mentions that mental illness runs in her family.

Cannon’s bleak, often-tumultuous circumstances provide rich material, but the story is hampered by many issues. For example, her narrative often digresses, including an extended shout-out to her favorite Kansas City Royals baseball team and a discussion of a news bulletin airing while she’s writing this book. Such non-sequiturs generally end with some variation of “Now back to my story.”

While many events she relates entail different people, the drama feels similar, and the story becomes tiresome as she repeatedly makes bad decisions. Additionally, misspellings and typos abound.

The book’s final pages are the most puzzling of all, offering a disjointed, surreal account of what seems to be an assault she committed while fending off a man’s unwanted advances. She then jumps to the beginning of the night the incident occurred, a rambling description of having a fight with her man that abruptly shifts to an explicit aside about them having sex. This eventually turns into a muddled, self-composed rap and, later, a rant about abusive men and pedophiles.

Hampered by such incoherence, this narrative is likely to stymie the most persistent reader. It requires careful revision to find its audience.