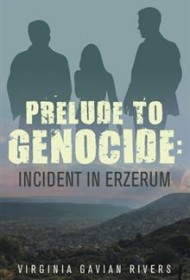 April 2015 marked the centenary of the start of violence against Armenian Christians by Ottoman Turks in what is widely believed to be a genocide that resulted, according to some estimates, in 1.5 million deaths. The lead-up to this dark chapter in history anchors this insightful debut work of historical fiction.

Prelude to Genocide is set in Eastern Turkey in the late 19th century. At that time, Turkey was a model for secular co-existence — until an outbreak of communal violence in Erzerum, the ancient capital of Armenia, ignited the fire that become the Armenian genocide. In Prelude to Genocide: Incident in Erzerum, this history is narrated through the eyes of the Kavafians, a Christian family of fairly affluent business owners whose security becomes increasingly threatened as violence spreads outwards from Constantinople.

Three characters — Martiros, the second Kavafian son; Marjan, the wife of the third Kavafian son, and Hamed, a Muslim captain in the Fourth Army — relate the story, which systematically builds in intensity toward its nail-biting conclusion. These alternating voices, each distinct in its own way, provide a rounded perspective of events even as one of the Kavafians gets worryingly involved in separatist movements. Marjan, especially, successfully portrays the slow yet deep fissures the tides of history can carve in a family’s dynamic.

Despite the interesting perspectives they provide, the chorus of voices here occasionally becomes overwhelming and the constant shift in viewpoints somewhat jarring. Much of the story is based on real-life events: Marjan, in fact, was the author’s grandmother. Portrayed with many vulnerabilities and strengths, she emerges as the standout character. The Kavafian brothers on the other hand, meld into each other, making readers a little less invested in their final outcomes. For a work that’s mostly literary fiction, the title, too, is off kilter.

All said, though, this is a moving story of survival that shines light on how humanity manages to peek through, even in history’s darkest hours.