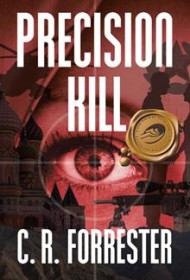 Precision Kill is a fast-paced espionage thriller centered on the experiences of Sasha Zukuv, a Russian career officer during the 1980’s war in Afghanistan.

From the very first page we know that Sasha and his family are exceptional.  Sasha’s first recollection is laughing at his father and grandfather, both career officers, playing a silly drinking game. He was laughing to show that “he was aware their behavior was out of character, and wanted his mother to know he understood that.” Sasha was less than one year old. Both his father and grandfather became generals in the Russian army; his grandmother, Sofia, a psychic.

So when Sasha, now a colonel, goes off to Afghanistan to fight in the 1980’s war, we are not surprised that he experiences extraordinary adventures, including two near-death escapes, being rescued by another out-of-the-ordinary individual—Rinjis, a young Afghan woman with whom he falls in love— then returning to Russia and being recruited by the exclusive, ultra-secret GRU, and becoming involved as a partner with the CIA in the most singularly world-threatening international espionage caper ever.

C.R. Forrester’s prose is engaging, his research and knowledge of Russia at that time clearly deep. Although the book is a tangle of intertwining, almost random sub-plots, and a plethora of good-guy and bad-guy characters with their own stories, goals and obstacles, Forrester manages to weave his way through the Gordian knot by deftly alternating chapters and interspersing scenes in a way that maintains the reader’s engagement.

Unfortunately, he plays the exceptional card a bit too often, and this affects believability. Some  events, particularly centered on Rinjis’ and her Afghan mujahedeen family, stretch credulity too far. In the end, one comes away wishing the few flaws and loose threads had been more neatly tied up. Still, on the whole, readers will find Precision Kill to be a captivating, action-filled and entertaining tale.