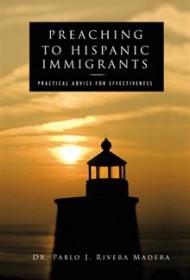 Dr. Pablo Rivera Madera, ordained pastor in the Presbyterian Church USA and an Army chaplain, sets out to school non-Hispanic preachers in how to successfully preach to Hispanic congregations.

Given the dramatic growth and intensity of religious devotion among Hispanics in the U.S., Rivera deserves credit for identifying a huge need and a timely topic. This is ground ripe for plowing, and Rivera does deliver some useful suggestions, such as advising preachers to accept invitations from congregants to eat and socialize, to show interest in their children, and to be familiar with words that may have different meanings in Hispanic countries.

But sadly, those suggestions are mostly an afterthought toward the end of the book. Most of the book reads like a master’s thesis, with page after page devoted to the methodology and conclusions of a research project Rivera undertook to survey Hispanic preachers about their preaching and sermon preparation styles. It’s long on academic jargon and short on real meat. It’s also questionable how applicable Rivera’s findings are to the bulk of Hispanic congregations in this country. He surveyed 36 Hispanic preachers. Of that number, two-thirds were Pentecostal, yet fewer than 7 percent of Hispanics in this country belong to Pentecostal churches. The vast majority — 67 percent — are Roman Catholic, yet Rivera’s survey included just one Catholic priest.

What’s more, it’s impossible to know whether the preaching styles Rivera’s respondents extol reflect Hispanic preferences or are simply a reflection of Pentecostal culture. For example, he suggests sermons to Hispanic congregations should not be less than 30 minutes long, and should always end in an altar call. While most non-Hispanic Pentecostal preachers would agree, Catholic priests, regardless of ethnicity, would not.

In short, it’s too bad Rivera spent so much time attempting to explain research findings and so little time speaking from his own experiences as a pastor. One suspects the latter would have made for a far more satisfying and useful book.