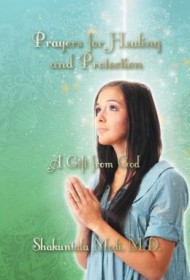 Many people believe in an invisible world, one populated by angels and demons that sometimes assist—and sometimes afflict—human beings in their everyday lives. While this may seem like fodder for the superstitious, the devoutly religious and those interested in the esoteric, as well as more and more doctors, scientists and psychologists, are embracing the idea that some of the problems people experience may have less of a physical origin and more of a metaphysical cause.

In Prayers for Healing and Protection, psychiatrist Skakuntala Modi recounts a number of experiences she had with patients after placing them under hypnosis. Could it be that many of the ailments people experience, from headaches to depression, are caused, not by invading pathogens and germs, but invading spirits that essentially possess a human being? Modi thinks so, and in a series of prayers and conversations with patients, she offers insight, protection and healing to those in need and often the invading spirit as well. For example, in one passage, she converses with a dark entity bent on causing car accidents, and is able to help the entity and similar demons change “into the Light” and go “to heaven with the angels.”

Modi is a born teacher. Though her explanations for the causes of illness will be hard for materialist readers to swallow, she nonetheless presents her material in a simple and easy manner.

One quibble: While the author is a seasoned professional (she has written books for Hampton Road Publishing) and her writing style is generally clear, the text presents some syntactical errors (e.g., “I usually ask my patients to focus on their symptoms and let them take them back to a time when the problems or symptoms began”). The book could use a thorough copyedit.

Yet, even in its present stage, fans of A Course in Miracles and the writings of Judith Orloff, Sonia Choquette, and Doreen Virtue will find much to like here.