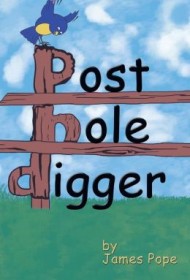 Whether gathering eggs on the family farm at age three or helping his dad clean the local schoolhouse at 13, James Pope had worked a variety of jobs by the time he graduated from high school. In this memoir, Pope recounts his Iowa childhood and how he and his siblings helped their parents make ends meet during the Depression and World War II.

Still a teenager when his father died, Pope took his dad’s place as school custodian, finishing out the year at the same school he attended as a student. When the school boiler was inspected for the final time before Pope left the job, he impressed a jaded state inspector. “So far, every boiler I’ve inspected has failed, and I have to go back two or three times before they pass,” he told Pope. Later, handing Pope the certification, he said, “How the hell does a fifteen-year-old learn all this stuff?”

Pope’s writing brings to mind a grandfather’s reminiscences: He tells a charming anecdote with relatable, personal details (as in his tender recollection of his first sexual experience at 14). But, with too few dates or descriptive transitions to mark his memories in time, in addition to odd paragraph breaks that disrupt the narrative flow, his book can be confusing.

Although the author attempts to tell his tale chronologically, events tend to run together. At the end of a story about breaking his collarbone, for instance, the doctor advises his mom to pour cornstarch down his cast if it begins to itch. “Jim was now five,” the next sentence begins. “Everyone was around the breakfast table.” It becomes clear that he is no longer in a cast; the entire scene has abruptly changed.

With such obstacles to comprehension, Pope’s memoir will have difficulty attracting general readers, even though it adds a wonderful voice to his family’s history.