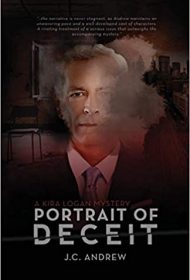 In this mystery, an artist and portrait painter is caught up in a murder when she tries to help a woman flee an abusive marriage.

Artist Kira Logan paints and sculpts in many mediums. When her friend Bonnie from exercise class approaches Kira about doing portraits, Kira is soon commissioned to paint Bonnie and her husband Carlton, and Carlton’s real estate partner Frank and his wife Patricia.

As she paints each portrait, she soon becomes enmeshed in their lives. She discovers that Frank is controlling and unpleasant, even designating the outfit Patricia must wear in the portrait. Kira and Bonnie begin to suspect that Frank beats Patricia, although in classic wife-abuse fashion, Patricia denies the allegations. Eventually, she confides in Kira that she’d like to escape Frank but she’s worried about how to leave with her two teenagers, Dale and Stephanie, who both have difficulties of their own.

Then someone poisons Frank’s favorite candies, and the focus shifts to who’s trying to kill Frank. Although Frank survives the poisoning attempt, it’s not long before the killer tries again.

For those who like their mysteries straightforward and easy to read, J.C. Andrew has the formula down. The book, set near Phoenix, has a strong sense of place: Readers can almost feel the heat and dryness. Additionally, the details of Kira’s work as a portrait painter are fascinating, giving readers an inside look into the medium’s complexities.

Unfortunately, there isn’t much else to the story. There are too few suspects, and Andrew’s attempt to throw readers off the scent of the murderer is egregiously misleading. Copy editing errors— i.e., a capital D on “dinner”; “it’s” instead of “its” – require addressing.

Still, readers may find the author’s handling of Patricia’s dilemma compelling as she struggles to free herself from an untenable situation. And Kira is a likeable heroine and perhaps the kind of unlikely character mystery fans will want to follow into other books.