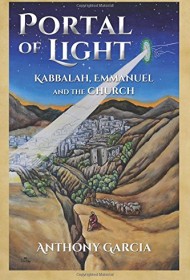 The Portal of Light: Kabbalah, Emmanuel and the Church, by Anthony Garcia combines religion, spirituality and the tale of two lost notebooks to create an intriguing record of the persecution of one segment of Spanish Jews during the Inquisition. Many of these people, forced out of their homeland, traveled across the Atlantic, hiding their religion from Christians in the New World.

The author accounts how in 2011 he came into possession of two old notebooks. One contained a 280-year-old “sacred play from the New Mexico Territory” in which a group of shepherds follows a doorway of light to the birthplace of Jesus (written in cryptic, allegorical language to disguise the true intent of the work as one of Jewish mysticism). The other was a series of alabados (or psalms sung within secret Jewish groups looking to avoid persecution from Christians). This chance happening leads the author to investigate the history of those who settled in what is now North America and examine the belief systems that Spanish Jews kept concealed from others in their new homeland.

There’s a lot to sink your teeth into here. The topics, such as the secret history of Kaballah in Spain and New Mexico, the alabados’ spiritual significance, and Judaic astrology are fascinating. But the ideas don’t connect in a cohesive way. Part of this could be due to the awkward sentence structure that permeates the book (as in the opening line: “The history of the Spanish people in what we refer to as the New World—the United States and Mexico—would be incomplete without a record of Cryptic Judaism, hidden within the public faith, Catholicism, that was the cause of the immigration of those of the Hebrew Faith from the Old World…”).

Yet, there are also moments when the prose shines, proving that Garcia has the chops (and ingredients) to deliver a historical page-turner. With the help of a seasoned editor to organize the material and hone Garcia’s writing, this intriguing historical discovery could be more clearly illuminated.