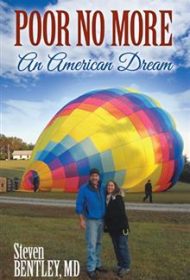 Steven Bentley tells the story of his troubled childhood and eventual career as an emergency medicine physician in his memoir, Poor No More.

Bentley was one of five children of an alcoholic mother and a father with white supremacist leanings. His parents divorced when he was 7. He and two siblings eventually ended up in an orphanage, where life was even tougher. But he persisted, put himself through college and went on to get his medical degree.

As the story unfolds, we learn of his chronic health problems (he was born with a genetic affliction that resulted in constant sinus headaches and lung problems), his youthful mischief, and his bond with his brother, Michael. We also learn about his pursuit of adventure. With an innate curiosity and determination to enjoy life, he explored caves, collected snakes, taught himself to ski, and more. He left jobs to travel; when his money ran out, he found another ER gig. While he admits that he became a physician to make money, he eventually realized that he enjoyed helping people and had become a good doctor.

The book is often choppy because of extraneous dashes (“It seemed like there was a lot of — wailing and gnashing of teeth. There was also a lot of — begetting — as I recall.”) Also bothersome is his overuse of exclamation points. In one chapter, 11 of the first 12 sentences end with that punctuation. Additionally, readers may find it hard to absorb all the troubling elements of the author’s life: Bentley’s brother killed himself, a sister died young of cancer, Bentley himself had two hip replacements and a stroke and once tried to end his own life.

Still, Bentley relates his interesting story in an equally interesting manner, and he always bounced back, not necessarily with a smile, but with determination. Readers are left with an important lesson: While adverse situations may shape us, they don’t have to define us.