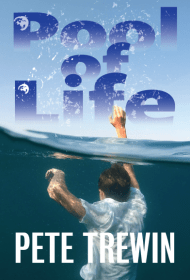 Jack Gordon is an ex-cop running a struggling detective agency in Liverpool. When he acquires a case about water and land rights, Gordon and his small, dysfunctional team find themselves investigating why anarchists are threatening a proposed development on the Mersey River.

The woman who hires Gordon has mysterious family secrets, including centuries of profiting from the slave trade and mining, a sister who disappeared years ago and is presumed to have drowned herself in the Mersey, and a husband whose questionable business partner is the developer who would benefit from the water and land deal.

Trewin evokes the time-proven trappings of a Raymond Chandler book, with the somewhat seedy private eye taking on a wealthy client who begs for help without bringing the attention of law enforcement or her husband. His story also recalls the 1974 detective film Chinatown, especially with Gordon getting punched in the face and sporting a bandage and plaster over his nose, a la Jack Nicholson’s character, J.J. Gittes, and with both plots involving water issues.

While compelling, the story can be confusing for non-Britons. Trewin has lived in Liverpool most of his life, and his dialect is pure Liverpudlian, with many slang words embedded in the prose, such as: “Alan had been raised on a corpy estate in Whiston…It was on the border between the woolly backs and the scousers. And Alan was one of the scousers. They’d had many a good gang fight with bricks and sticks. Later knives, baseball bats and pistols. Happy days.”

Along with the sometimes-difficult language for American readers, Trewin includes a minor terrorist subplot Gordon’s team is hired to ferret out. This is resolved somewhat anti-climactically and may have made an interesting standalone book instead of being orphaned here.

Even so, the main story of Pool of Life is worth the read, with an interesting twist at the end.