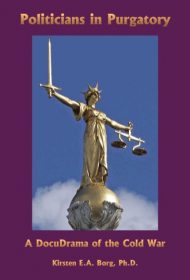 These statesmen led their respective countries during the Cold War (1947-1991), and their trials are “to determine [their roles] in starting or maintaining” that war. Of the five, Johnson was the only one not in office on or near the beginning of the Cold War. Johnson assumed U.S. presidency in 1963.

Other characters are Devil’s Advocate (prosecuting attorney), Guardian Angel (defending attorney), Justice (judge) and Recording Angel. Through a series of questions and answers and material provided by Recording Angel, each character’s biography and actions are revealed. Readers learn, for instance, that De Gaulle had France develop its own nuclear bomb as a deterrent, and that Nehru spent much of WWII in “British jails” for protesting Britain’s rule of India. After their testimonies, each politician is assigned a place in either heaven, hell or purgatory.

By combining these statesmen in a trial format, Borg creates an illuminating montage of each stakeholder’s concerns and contributions to the Cold War. Readers should be forewarned, however, that the picture is slanted. By using Johnson rather than Harry Truman (Truman was president at the Cold War’s start) as the American character to be questioned, Borg can conveniently omit Truman’s containment policy, which required America to assist nations in resisting communism. Instead, she indicates Churchill was responsible for America’s participation in the Cold War. He urged the “Americans to recognize the danger” of communism.

Moreover, Borg’s characterization of Churchill is wholly pejorative, portraying him as vain and arrogant while the others are treated more kindly. For example, Khrushchev (who was responsible for the death of thousands) is depicted as a jovial bear of a man.

Despite Borg’s animosity toward Churchill, her docudrama is packed with information, and its format makes it an accessible introduction to the Cold War and its consequences.

Also available as a hardcover and ebook.