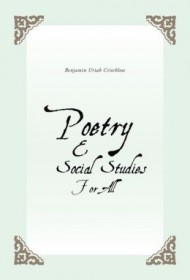 Poetry & Social Studies For All is, as the back cover states, a “Collection of Poems relating to Social Studies with Exercises in comprehension after every poem [sic on capital letters].”

Often laden with names, dates, and places, the poems tend to read as rhymed reportage, relaying historical information to readers. For instance, “The First Non-white President” begins: “He was first introduced to America in two thousand and four/ When Kerry wanted to oust Bush and improve on Albert Gore […]” The presentation style is journalistic rather than impressionistic, with no discernible unique and expressive poet-speaker to bring a human perspective to these facts.

Nearly all of the author’s poems are followed by numerous and overly detailed reading comprehension questions. Typically, readers are asked to define ten or more words used in the poem and instructed to research events referenced therein. Many of these exercises seem unreasonably time-consuming, even for highly motivated readers. For instance, after the poem “In honor of the Nation: E Pluribus Unum,” a long list of individual prompts follow, culminating in: “Final Question: In the final stanza, 29 persons are mentioned. Identify each person and state each person’s claim to fame, if any.”

Critchlow’s coverage of historical events and concern for social justice is admirable. His poems frequently identify the ongoing dangers of sexism and racism in our society — important topics for poets to address. However, he often falls into unwelcome didacticism, as in the lines, “Our world should work steadily to deal sensibly with diversity/ For no longer should we ever hear of forms of racist tyranny.” And he risks overloading readers with too much information.

Critchlow could improve his offering by significantly reducing the length and scope of his exercises and by including some questions that allow for emotional response and subjective discussion. As it stands, his book delivers a dense amalgam of elements that limit its potential appeal.