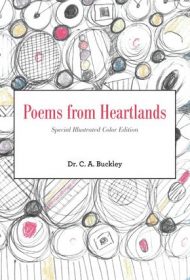 In this poetry collection, Dr. C.A. Buckley, a Roman Catholic priest, examines our destiny as mortals. How do we fulfill God’s expectations? How do we find comfort amidst solitude? What does it mean to achieve piety in our daily lives? He also ponders topical items: Mother Teresa’s canonization, the anniversary of Hiroshima and Nagasaki, a brother’s death, Pavarotti, and more.

Buckley’s poetry is mostly free verse; while he uses rhyming occasionally, it’s rarely throughout the poem. Illustrations and handwritten poems enhance the text.

The author is intelligent, articulate, vivid, and forthcoming when describing emotional struggles. “Can I bear a lockdown of my liberties?” he writes in “Surviving the Virus.” “Will it cause/ Isolation, loneliness, or maybe cabin-fever psychosis?” He is worldly, not hesitant to discuss lustful thoughts in celibacy: “An eternal adolescent, in thought only,/ Each day he had taken by the waist/ Many scantily clad enticers[…]”)

The poet’s ache for clarity and fascination with philosophical quandaries, are consistent themes, as he repeatedly considers the need for metaphysical answers. Does God give us the tools to ease loneliness? When we consider the nameless void, whether in outer space, the thick of a blizzard, or the mind’s despair, is this part of the soul’s journey? How do we rise above man’s amorality? Sometimes Buckley uses biblical, liturgical imagery, sometimes secular. Throughout, he’s accessible, never didactic or pompous.

The collection also has some flaws. Buckley’s need to dissect the above questions repeatedly, in different settings, becomes wearying. His text is often expository prose, despite the line breaks. Also, while his descriptions can be vivid and imagistic (“But the magpie was more than satanic,/ Fat, arrogant, a black and white/ Spotted thief […],” often he uses generalities that dampen the work’s impact. Finally, the author’s word order is sometimes awkward or obtuse.

Some revision could make this work more powerful. Still, readers will appreciate the author’s unmistakable and deeply affecting feeling, intellect and humanity.